(This article is a repost from here )

The game system behind “Sword Art Online: The Beginning, Sponsored by IBM” was a hybrid of IBM’s cooperation utilizing its cutting-edge technology and the ideas of 1-10HOLDINGS, the company behind event planning and production. The Sword Art Online (SAO) series has appealed to a great many fans not only in Japan, but on a worldwide scale. At this event, the idea was to see how closely the futuristic SAO experience could be replicated using today’s highest level of technology. Let’s take a detailed look at each facet of the system to see how they did.

The 3D Scanning System and SoftLayer

The game system created for this event required users to make “avatar” characters in their own likeness to enter into the SAO game world. And to make this avatar, each user had their entire body scanned with the 3D Scanning System, in order to capture the required information. The scanning system incorporated several customized motion sensor devices, using a technique that requires users to spread their arms and legs apart, so it can film them from the front, back, left, and right. The filming itself was done in an instant, not only capturing the outer layer of the body, but skeletal information as well, so that in-game player movement could flow naturally.

Once the scanned data was integrated, with noise eliminated, it was sent to IBM’s SoftLayer cloud service.

In the full-dive type VRMMO（Virtual Reality Massively Multiplayer Online）system where players can immerse into the SAO world, the test model was created as a VR space through IBM’s SoftLayer cloud service. SoftLayer is often used in the game business because it meets the industry’s strict requirements.

For example, mobile game transactions will be processed at a rate of thousands, or even tens of thousands per second, so system stability is very important. SoftLayer currently has over 40 data centers worldwide, which means many users may have an accessible server, providing an environment in which movement is very smooth. It also offers a “Bare Metal” physical server service, ensuring high performance and stability even under the high load condition.

In addition, in the game industry just as in many other industries, the market is spreading throughout the world. When considering global markets, international dedicated lines that connect data centers all over the world are essential. And its high-quality, broadband network providing high-performance data transmission is well recognized.

That is why SoftLayer is a popular tool in the game industry, which often has to provide a sense of realism to users.

In the VR world, sometimes complain of a discomfort referred to as “VR sickness” is reported. When this system was being built, one of the most important aspects considered was how to reduce VR sickness. For video production, there is something called “frame-rate,” which indicates how many still images are used per second, and a drop in frame-rate can sometimes cause VR sickness. Since this system is able to achieve a high frame-rate while maintaining high-resolution graphics, sickness is reduced. VR sickness is also caused from feedback appearing on the screen, which is different from your own body’s actual movements. To prevent this phenomenon, the sensors that detect body movement are switched as needed for optimization.

When media artist Yoichi Ochiai experienced the event, he stated, “I was impressed that there was virtually no drop in frame-rate. It seemed like a huge amount to process, but when I put both hands out in front of me I was able to guard just like I wanted to.”

An image of “NerveGear” the VR headset used at the event.

Prototypes of the“NerveGear” VR machine headgear featured in the SAO series were created exclusively for this event, so that participants could experience the SAO world. In order to replicate the SAO world experience, developers went with the helmet-type VR machine, because of the assumption that helmet-type may be created during the “alpha test” part of the story, and called the“NerveGear”. However, a feasible “alpha test” prototype of the story’s“NerveGear”machine would be limited to the visual and auditory among the five senses. It also includes a voice chat feature, allowing players to communicate in real time during gameplay. 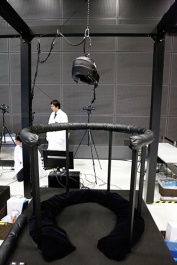 Movement was detected from a diverse range of angles with Leap Motion, Kinect, OVRVISION, and the 9-axis sensor among others.

Movement was detected from a diverse range of angles with Leap Motion, Kinect, OVRVISION, and the 9-axis sensor among others.

Player movement was detected using various sensors. The headset used devices called Leap Motion and OVRVISION to detect hand and finger movement, ensuring visual capability when it was put on. Kinect was positioned in front of the player to determine which direction he or she was facing, as well as movement, arm waving, etc. Combining this with Leap Motion produced an optimal effect.

In addition, original devices to be attached to the legs were created exclusively for this event. The internals included a 9-axis sensor capable of detecting rotation speed, acceleration, and terrestrial magnetism. This made it possible to reproduce spontaneous player movement at a range of 360 degrees. Using these sensing technologies enabled players to walk freely around the world of the original story at a slow or brisk pace.

Can cognitive computing be used in a game world as well?

A “Cog” character appeared in the game to help players get familiar with movement techniques in the game and how to defeat the monster in a fighting scene, and the development of this character was based on evoking IBM’s cognitive computing system.

Cognitive computing is a technology that is clearly different from artificial intelligence which has the goal of imitating human behavior and which has been thought about up to now. Not only should it be able to interpret natural language, written language, and visual information, but it should also be able to deduce or reason based on inferences behind the information taken in.

A lot of futuristic topics were covered at this event, including VR, sensing technologies, cognitive computing, and SoftLayer cloud support. It was an ambitious project, attempting to replicate the world of SAO by utilizing the latest technologies we have available. And a fascinating future that incorporates all of these technologies may be closer than we think.